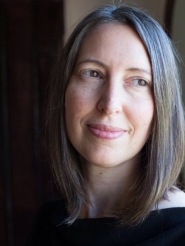 Audiences. Stephanie is visiting Rhode Island all the way from LA, so this really is a special opportunity. AND the course is being offered sliding scale, starting at just $25.

If you’re still on the fence, just read what Stephanie had to say when we asked her a few questions about the course.

FREQUENCY: The class description for Imagined Audiences states, “We might—if we dare—invent and invite a new species of reader.” Can you give some examples of what an imagined “species of reader” might mean?

STEPHANIE FORD: To answer this, I’d like to share what got me thinking about the poet’s—or, really, each poem’s—approach to audience in the first place. In reflecting on my own experience as a reader and trying to understand what factors might lead me to keep reading a poem vs. deciding to move on, I found that one of the things that really hooks me is when a poem addresses me in an arresting way, inviting me to listen in a manner that feels like either a challenge to, or a respite from, my daily modes of being in the world. I like poems that seem to announce, from the first line, “I am going to teach you my language”—not because the poet explicitly positions her- or himself as avant-garde or experimental, but because the poem itself bears the pressures of translating a complex and deeply considered perspective that calls on my ability to learn as I read.

I also began to think about poets I admire who strike me as being particularly adventurous in this regard—whose poems, in order to push against limiting or irrelevant poetic conventions, demand new capacities of their readers. And then I started to think about how this might be a generative question in the making of poems:. What if, rather than defaulting to my generalized sense of the readers who might “hear” my work (a potential audience that, if I really tried to picture it, seemed to have the color and responsiveness of Silly Putty), I acknowledged to myself what kinds of readers (whether real or entirely speculative) I was interested in engaging in my work, and wrote my poems accordingly? What would it feel like to consciously address more than one of these hypothetical readers in the same poem? If I could envision an understanding audience for a poem that seemed too strange or difficult to write, could I be emboldened in my grasping toward the seemingly unsayable? As a means of generating raw material from new sources—which is what I hope my students will gain from this workshop—these questions seem exciting to me.

F: As an audience changes, how might this alter the writer’s motivations and actions? What new information could be revealed or kept?

SF: There are all kinds of authoritative and time-honored exhortations for writers not to consider audience; we are told again and again that what sets writing apart from other activities is that it occupies a realm in which we need answer only to ourselves, or to the demands of the work itself. Further, to expect that one can directly and successfully communicate with any specific reader or set of readers would be naive as to poetry’s relationship to meaning, nebulous and unstable as it is. However, modes of “address”—the subtle but powerful ways in which poems teach us how to hear them, and include us within their seemingly private conversations—are fundamental to how poems work, and are ripe for poetic play. To imagine that one could shift one’s relationship to a proposed audience—in the sense of asking How would I write my poem if I supposed that x was my reader?—is what I want to explore in this class.

How might this practice further manifest itself in our work? We might exercise a more precise and nimble control of tone, diction, syntax, and point-of-view. By imagining specific, shifting sorts of auditors for our poems—sympathetic or hostile, living or dead, familiar or far-removed—we might become more at home with the notion that all writing is an act of translation rather than a direct transmission of thought and feeling. We might take to heart that to presume or aspire to a universal perspective is a dead end, and that to write from an outward-reaching, yet particular and embodied, place offers a different kind of richness. In terms of motivations and actions in the world: my hope is that we can see that poetry is already here—not a separate realm to which we need gain admission—and that we find ways to write, share, and talk about poems accordingly.

F: Can you talk a bit about how imagining a particular audience may change the writer’s relationship with his or her actual audience?

SF: Another side to this is the specifically (peculiarly?) American way in which I’m thinking about these questions. Given the differences, divisions, and structural inequities that govern social life and individual experience in our country, and the many instances of cultural tone-deafness, crossed wires, and outright harm-doing that I see as both symptom and agent of these conditions, I wonder if and how poems can be places to contend with the complexities and contradictions of any poet’s particular American-ness.

Yet another way to look at this, returning the focus to the moment of writing, is to ask To which self, or selves, am I being true in any given poem? Separating out the many possible ways of answering this question, and finding sophisticated ways of manifesting internal tensions in our poems—it seems to me—can be a productive way of moving toward greater awareness of oneself in relation to others, and of moving one’s writing toward greater precision, complexity, and effect. And to do this is ultimately to invite the living, breathing people who read one’s poems to take part in the process. When reading the work of Cathy Park Hong, Claudia Rankine, and Donald Revell—to take just three of the poets we’ll consider in the class—I find myself called upon to exercise new faculties of listening, thinking, and responding. As a reader, I find these writers’ modes of poetic engagement to be both challenging and exhilarating; in order to meet such writing on its own terms, I must do real internal work that does not end when I close the book; my mind is re-wired and new questions pursue me into my daily life. On the one hand, this can be seen as the natural outgrowth of any poem/reader relationship, but when writing is sufficiently ambitious, I believe that its author has, by inviting us to listen anew, also conjured a new audience into being.

Stephanie Ford is the author of All Pilgrim (Four Way Books, 2015). Her poems have appeared in Tin House, Boston Review, Fence, Harvard Review, The Iowa Review, and elsewhere. She lives in Los Angeles, where she currently teaches poetry with Writing Workshops Los Angeles.