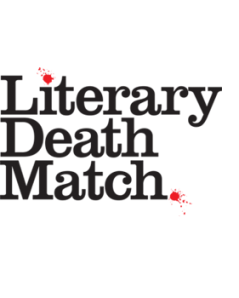 You guys may have heard of Literary Death Match. If you’re smelling blood every time you open a copy of The Round, that’s just because LDM is coming to Providence– in less than a week!

As is tradition in LDM, each writer competes on behalf of a literary entity, and Darcie Dennigan is competing on behalf of FREQUENCY. If you want to hear the awesomeness of the other competitors (including MARVELOUS poet/reader Mairead Byrne) and cheer on Darcie, who will be nauseous with fear until well after the event but promises to pretend she’s not, we’d be so happy to see you there!

Rhode Island, here we come! An event nearly seven years in the make, Literary Death Match descends on The Creative Capital (and more specifically Empire Black Box) to make Providence our 46th city with a whimsy-filled night of literature, libation and laughs. Not to be missed!

They’ll do their best before a trio of all-star arbiters, including the fantastic screenwriter Joe Birbiglia (Sleepwalk with Me), Boston-based stand-up comedian Gary Petersen, and poet Gillian Kiley (author of Keyhole 6)!